The meaning of numbers in Vedic numerology

Indian or aedic numerology describes and works with nine basic numbers. Starting from 1 to 9. All other numbers are reduced to the main ones by adding. Zero – not used as a separate number, but is needed to give shades to the main numbers. It is believed that zeros in the date of birth indicate additional difficulties in the fate of a person. Also, zero weakens the influence of the number with which it is paired.

Numbers in numerology are divided into:

There are “relationships” between numbers. The connection of even with even and vice versa are interpreted as unsuccessful combinations, because in the sum an even, static number is obtained. But unions of even and odd numbers are better, since their sum gives an odd, dynamic number. It is interesting to know that the relationship between is correlated with the relationship between the ruling planets of these numbers, but even here everything is not so simple. Two friendly numbers give calmness and relaxation, but unfriendly ones create situations for development and dynamics.

Most numerological predictions are based on your Destiny Number and it plays a key role in deciding your destiny. Your destiny number will help you decide what is best for you. Make career choices based on your ruling number. This will definitely help you overcome obstacles along the way and succeed in life.

The number of the Soul in Vedic numerology

Our mental body is formed based on the circumstances of birth, and specifically depends on the place and time when the Soul took its first breath in the body. For astrological calculations of a birth chart, an astrologer must know the exact time of birth, but in numerology it is enough to know the date of birth. The number of the Soul gives a description of the subtle qualities of a person, his attitude towards himself and the world around him. Knowing the Soul Number of a partner, one can determine his preferences in food, attitude towards sex, behavior in friendship, at work, what he expects in marriage and what he strives for in life. This number has an impact throughout life, but is especially active from birth to 33 years. But after 33 years, activity moves to the Number of Destiny.

How to find out the Soul Number:

The number of the Soul can be found by adding the numbers in the date of birth.
For example, a person was born on December 12, his Soul Number is Three (1 + 2 = 3). An important point to consider is the time of day of birth, because. in India, a new day begins at dawn, and not at 00.01 at night, as is customary in the West. This model of time calculation is more applicable in life, because. synchronized with the processes in the universe.
The number of the Soul has an influence on the deepest spheres of human life. Each of us has two images:

So the Number of the Soul refers to the first image, to what a person thinks about himself, but the Number of Destiny indicates how others perceive us and what they think about us.

Your Destiny Number is calculated by adding the numbers of your date of birth. The numbers are added up until one digit is obtained, which becomes the numerological or ruling number in fate. Your numerological number represents the plan of your life and can decipher the various aspects in it. It is quite difficult to influence the energies of this number, because it represents the karmic fruits of our past lives. But with a certain perseverance and the implementation of special prescriptions, you can slightly adjust its influence on some areas of life.

How to find out the Number of Destiny:

The first sum – 27, is also analyzed and the numbers from it will appear in a person’s life, more than two and less than seven. But the nine will have the main influence, the smaller two and the small seven. Ancient texts speak of the dominance of the number of destiny over the number of name and destiny. This is explained as follows: the soul can desire anything (the number of the soul), but it is important to understand what tools we have for the implementation of our plans (the number of fate), and personal skills are acquired over time (the number of the name), they can always be changed.

This system takes its roots from ancient times, when people had several names. Each had its own purpose: a public name, a family name, and a spiritual name. To compile a name for the child, the parents came to the astrologer (he is also a numerologist in one person). According to the birth chart, the astrologer determined the dharma (destiny), after which the necessary letters were selected to help the person through vibrations of numbers in subtle energy fields.

Each letter was assigned a number from this combination made up the names. Nowadays, the Pythagorean system is most common, which Mrs. L. Dow Balliett, author of the books “Success due to the power of vibrations”, “Philosophy of numbers”, “Symphony of nature”, etc.
(There is another branch of “Pythagorean numerology”; it was described in their books the famous British occultists of the 20th century, Arthur Edward Waitey Sepharial, invented it by Heinrich Cornelius Agrippa in 1510.) The beginning was taken from Kabbalistic texts, where each of the 22 letters of the alphabet corresponds to a number:

In Vedic numerology, the following meanings of Latin letters * are used: 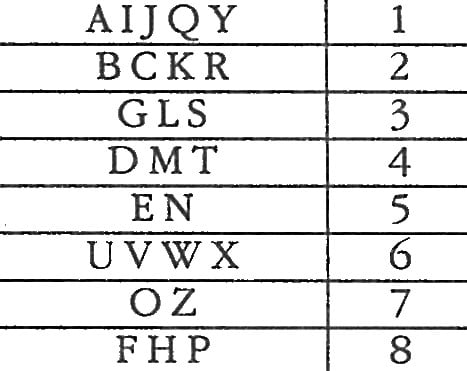 The three and its vibrations will affect different areas of this person’s life. It is easiest to work with him, because. you can change the name and the number of influence will change.

* In different sources, you can find a discrepancy, this is due to various reasons and the translation of primary sources. Trust professionals and your intuition.

How to Use Numbers in Vedic Numerology

Knowing your numbers, a Vedic numerologist can help determine the perfect match for you. You can also get accurate numerological predictions for the coming year. And even more, understanding what difficulties lie in wait on the path of life, you can order a personal amulet and pass the tests of fate more confidently and without loss.

Express consultation on the number of fate, name and year – $ 20. You will receive answers to your questions + recommendations on what is worth and what is not worth doing in a particular situation.